As we approach the last several weeks of calendar year 2020, I thought it would be useful to put things in perspective by looking at some economic and demographic data that should paint matters in a more positive light than what we have gotten used to throughout 2020.

In the early 1960s, the United States economy represented about 40% of the world’s GDP. Fast forward to 2020 and that figure has shrunk significantly to less than 25%. This is not necessarily a bad thing, far from it. This phenomenon is based on demographics and the various stages of growth in which the countries across the globe find themselves. As the US and other developed economies continue to mature, some other regions are growing at remarkable rates. This should lead to more opportunities being created for a greater number of individuals across the world, thereby creating substantial wealth in faster growing countries while also raising the standard of living for the vast majority of global citizens. According to a comprehensive 2017 study conducted by PwC, emerging market economies will be a dominant force in the 2050 global economy: 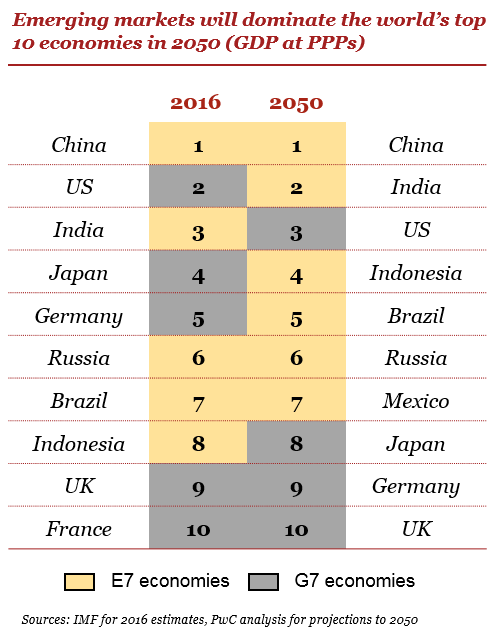 The total value of all U.S. based public companies listed on US stock exchanges was valued at $36.26 trillion as of 9/30/20 (source: Siblis Research). In addition, according to Apollo Global Management, the value of all globally listed stock markets reached an all-time high of approximately $95 trillion as of November 11, 2020. These figures show the amazing resiliency of global financial markets in the face of extreme uncertainty not to mention all of the adversity 2020 has thrown at us.

We are healthier and wealthier than ever before

In his book Abundance, The Future Is Better Than You Think, Peter Diamandis writes about all of the great things that have happened globally over time. Despite all of the unspeakable tragedies that occurred during the twentieth century, tremendous advances occurred. For example, the twentieth century saw “infant mortality decrease by 90 percent, maternal mortality decrease by 99 percent, and, overall, human lifespan increase by more than 100 percent. At the same time, the cost of food has dropped thirteenfold, the cost of energy twentyfold, and the cost of transportation a hundredfold.”

In Better Angels of our Nature, Steven Pinker points out that, contrary to popular opinion, we live in the most peaceful time ever in history. Pinker, a professor of psychology at Harvard writes, “as one becomes aware of the decline of violence, the world begins to look different. The past seems less innocent, the present less sinister.” To put some statistics around this, Pinker informs us that our chances of dying a violent death have dropped five hundredfold since the Middle Ages.

Of course, everything is relative and, we still have a long way to go to create a more peaceful and healthier society. That said, we have come quite a long way over the course of history and will likely continue to improve our quality of life across the globe. As Diamandis points out in his book, “while there are likely to be plenty of rude, heartbreaking interruptions along the way…global living standards will continue to improve regardless of the horrors that dominate the headlines.”

Further, per capita income, both US and globally, continues to rise. Based on a recent survey conducted by the U.S. Census Bureau, we can see that Median household income in 2019 increased to $68,703. This was a 6.8% increase over the 2018 figure of $64,324. This increase is the fifth consecutive annual increase in median household income.

Before this year, even the US poverty rate greatly decreased from 14.8% in 2014 to 10.5% in 2019. The 10.5% poverty rate is lowest seen since estimates were initially published in 1959. Unfortunately, this number is likely to increase in 2020. And while we have made tremendous strides in reducing poverty and increasing living standards, we still have an enormous way to go. A US poverty rate of 10.5% means that approximately 34,000,000 people were living below the poverty line. The current poverty line stands at $12,760 for an individual and $26,200 for a family of four.

2020 has been an extremely challenging year; obstructions and setbacks will continue and will always be a part of the human condition. We must keep in mind that despite all of the ambiguity and turmoil, great progress has been made across the globe on many fronts. If history is any guide, there is reason to believe we will all rise to meet these health, economic and social challenges and, just as those before us did, we will leave the world a better place for future generations.

It is with this positive, long-term, growth trajectory in mind that we invest our clients’ capital. We understand that financial markets are not linear and do not follow a straight line upwards. Every path to advancement has obstacles, impediments and sometimes even barriers along the way. We are also cognizant of the market’s general tendency to move upwards over time and to reward market participants with the equity risk premium. We continually strive for the optimal level of return for a client’s given level of risk in an uncertain world…that continues to be full of opportunity.

Thanksgiving gives us all a chance to reflect on all of the good things in our lives and, as noted above, for many, there is plenty for which to be thankful. We hope you have a wonderful, albeit different, Thanksgiving holiday.